Clay-Ali as a metaphor for strategic change

In a recent Facebook post, colleague Marty Heirty took us back in time to remember or learn about the famous confrontation between Muhammad (formerly known at Cassius Clay) Ali and George (before the grill) Foreman.

When a young, strong, well-trained, highly-conditioned Cassius Clay took “the ring,” his strategy was encapsulated in his signature phrase, “float like a butterfly; sting like a bee.” No one could dance their opponent into exhaustion, or evade his opponent’s strikes better.

When his title was stripped, and his comeback to the very competitive landscape of boxing against relative youngster, George Foreman, was on the horizon, a very different man prepared for the fight.

Now Muhammad Ali, rather than Cassius Clay, the pool of resources available to him to prepare for his bid for the world heavyweight boxing championship had changed dramatically. His opponent was formiddable. He may not have done a formal SWOT analysis; but, if he HAD, it might have brought the reality of his own weaknesses, and the threat his opponents strengths posed. One of Ali’s strengths, however, was his relative exerience, wisdom, and yes, intelligence — if he wasn’t able to take advantage of this huge opportunity by going head-to-head on strength, he would have to change from his former strategy to a new one. As we all know, it worked. 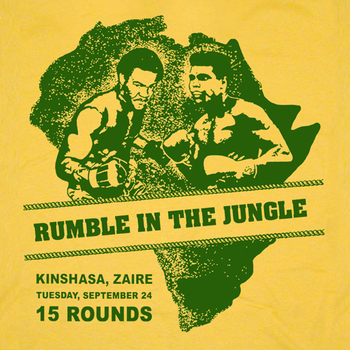 He coined a new phrase, in the winning afterglow of the “Rumble in the Jungle” — “Rope-a-dope” — he assessed his competition would come after him and after him and after him; he assessed that he had the strength and know-how to fend off the blows defensively through blocks; he knew the rope around the ring could provide him with stability and flexibility; and he knew he had the endurance, patience, and wisdom to wait his opponent out for the perfect opportunity. When it came, he took it. His opponent had been weakened; Ali had carefully economized his own expenditure of energy; when he reached the eight round, he saw the scales tip in his direction and landed the decisive blows that put his competitor on his knees, and won the match and the title.

This happens in business. The strategy that allowed the business to grow in the first ten years, though effective, has lost its ability to carry the company forward in the changing environment of today and tomorrow. With market share declining, or a particular market segment disappearing altogether due to a technology shift, the CEO must take stock of her vision for the next ten years, and carefully map a path to reach new goals and objectives with a new strategy. This may require repositioning the company and its products in a current market OR may require arming the company for entry into a new market.

At the heart of a company lies its brand. Its uniqueness. The essence that will attract and retain customers and employees. Do you know what that is for YOUR company? Is there alignment across your own organization and into the customer and prospect touchpoints so critical to strategic success?

Your brand must drive your strategy, which in turn will drive your tactics. If you feel your brand is ill-defined and/or poorly executed within your organization and across your target market, you may also feel uneasy about the appropriateness of your strategy.

Just as Ali, you may need to reassess and strengthen your foundational brand and strategy for the next major phase of your own business’ life. An eighth round knockout to regain the championship sure beats a loss in round one due to bringing the wrong brand strategy into the ring.