Lessons from a Discouraged Coyote

When I was a kid, I loved watching the The Road Runner Show cartoon on TV after school.  Yes, it was a little violent. Yes, it was a lot predictable. And no, it really wasn’t very funny.  But what I liked about the show was the Coyote’s creativity.  What imagination! I mean really, this dude had some creative chutzpah!  He came up with some incredibly inventive, out-of-the-box, traps to catch that bird.  Of course every one of his plans failed. You ever wonder why?  After years of analysis, I think I’ve finally figured it out.  Ready?

Here’s the scene:  The Coyote paints a large target on a road runnning down the middle of a canyon.  In the center of the target, he places a bowl of birdseed.  High above the target, between the canyon walls, he’s strung a tightrope. On the cliff’s edge, he’s placed a 2,000 pound anvil.  His plan is simple:  when The Roadrunner stops to eat the bird seed (as he always does,) he’ll carry the anvil across the tightrope and drop it on the unsuspecting Roadrunner’s head.  Good plan. 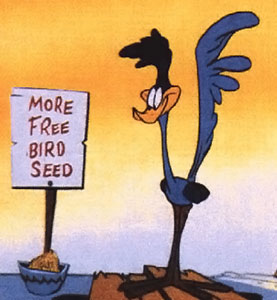 But here’s what happens:  As predicted, the Roadrunner comes running by, notices the birdseed, stops, and then starts eating.  Good so far.  The Coyote picks up the 1-ton anvil and starts walking out on the tightrope.  This is where an error in the plan is discovered. Overburdened with weight, the tightrope stretches, lowering the Coyote down to the street.  Still holding the anvil while standing on the taught tightrope, the Coyote finds himself face-to-face with the roadrunner.  The Roadrunner taunts him, and speeds away.  Furious, the Coyote releases the anvil to pursue the Roadrunner, which unfortunately causes the tightrope to recoil, launching the Coyote into the stratosphere where he is hit by an airplane.

So what does the Coyote do next?  Does he analyze the situation? Does he fix the problem with the rope?  Does he get a lighter anvil? Does he build a bridge instead?  No! He goes right to the rocket-powered roller skates!  This plan too, is met with failure. And then on to the ACME spring-loaded boxing gloves! Plan after plan fails and is thrown away.

I see this happen in many organizations. Great minds come together ands wonderfully creative and innovative solutions are developed. There is agreement by everyone: insiders, outsiders,experts, and customers.

“This is the solution we need!”

There is excitement and anticipation.

Planning happens and finally, execution.  Sometimes there is great success!

But oftentimes, results come up short.

“Let’s forget Plan A and try Plan B!”

What I love about working at Force 5 is that we are always trying to incrementally improve our systems, our business model, and ourselves.  That means isolating the variables, keeping and expanding on what went right, and fixing or disgarding what went wrong … and occasionally scrapping everything and going to plan B.  I think this makes us better for our customers and puts us and them one step closer to catching that elusive Road Runner.