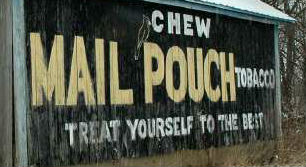 When I read about the 50th anniversary of President Lyndon B. Johnson signing the Highway Beautification Act, which was intended to limit billboards and other forms of outdoor advertising along federal highways, it reminded me of the iconic Mail Pouch Tobacco barns.

According to Mail Pouch barn enthusiast Eddie Robberts, farmers were willing to let Mail Pouch Tobacco paint their slogan on the side of the barn in exchange for a small amount of money, but more importantly the farmer would often have the rest of his barn painted for free.

At one time there were over 10,000 Mail Pouch barns, and a large number of them were painted by one man, Harley Warrick.  Harley started painting the Mail Pouch advertising on barns when he returned from service in World War II and spent rest of his career painting or retouching the “CHEW MAIL POUCH TOBACCO. TREAT YOURSELF TO THE BEST” slogan an estimated 20,000 times.

He did most of his work in a nine-state area that included Ohio, West Virginia, Michigan, Missouri and New York, spending up to 12 hours a day painting barns, six days a week, and then prepared paint in 5-gallon kegs on Sundays for the next week.

The Highway Beautification Act of 1965 prohibited advertising billboards within 660 feet of an interstate highway and effectively ended the era of painting the sides of barns for advertising. Though nearly all other sign painters went out of business, Warrick continued painting barns along lesser roads and highways until his retirement in 1991.

Mail Pouch signs were eventually designated as National Landmarks and some of Harley Warrick’s work has been exhibited by the Smithsonian.

Harley’s daughter Lena Williams once said, “He would always say if you could find a job that you would do without being paid, that’s what you should do.  I don’t think he really thought about it as work.  It was just what he did.”

To find a Mail Pouch Barn near you: