What you can learn from a Pinball Machine

Jerod Bast, the General Sales Manager at WSBT AM/FM and WHFB in South Bend, stopped by the Force 5 office for a meeting yesterday.  After talking business, we hit the vintage Coke machine in the lobby and played a game of pinball.  Afterward, Jerod wrote a post on Linkedin about the lessons one can learn from a pinball machine, I thought it was good, so I wanted to share it on our blog… 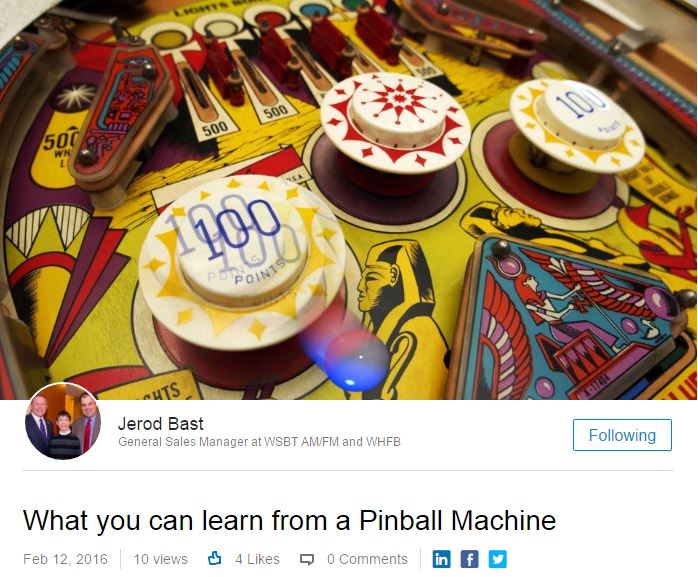 I was at a client’s yesterday who happened to have a pinball machine in the lobby so of course I had to pull the plunger.

As I was playing, I was thinking how much the Pinball Game represents the business world:

Aim and Don’t Flail  When you first start playing pinball, it is easy to just push the flipper button as fast as  you can to get the ball where you want to go instead of aiming where you want the ball to go.  Many small business flail away trying at how to grow their business instead of aiming.  They try to be everything for everyone and end up wasting a lot of energy.

Don’t Tilt Many novice players will try to bump the machine when the game is not going their way or make the ball go where they want it to go instead of right down the middle.  In the business world, you are going to deal with failures.  Don’t overact.  Remember what made you successful and focus on what made you successful, not freaking out with a bad month or quarter.

Keep pulling the plunger Success doesn’t happen over night.  If you aren’t losing you aren’t trying.  Failure is part of the job.  Don’t compound the pain of failure by not learning from it or you will be doomed to repeat it.

You don’t have to be a pinball wizard to be a success.  Just have the perseverance to continuously to improve and the game will be second nature.